The Spectre of Stalin

In a dramatic new docu-novel, one of the Soviet Union's leading
writers offers a vivid portrait of Stalin and a glimpse at the Great Terror 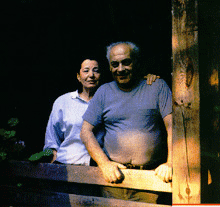 Rybakov is among the privileged elite of the Soviet Union, with relative freedom to travel abroad. He has a comfortable apartment in Moscow but spends most of his time at a dacha in Peredelkino, the writers' colony outside the capital. He has turned his study there into a library of documents from the Stalin era. His companion and collaborator is his second wife Tanya, who gave up her editing job at a popular magazine called Krugozor (Outlook) to help him complete Arbal: Rybakov admits that the book would not exist in its present form without her. Tanya discovered, for example, that Stalin's former dentist was still alive and insisted that Rybakov meet him, thereby inspiring one of the novel's most entertaining episodes.

Rybakov is now writing the second volume of his trilogy, to be titled 1935 and Other Years the third volume, tentatively 1944, will deal with Soviet life during the war. Pankratov will be a central figure in both books- as will Stalin. The popular success of Arbat has brought Rybakov much new material for his trilogy: every day he receives between 30 and 40 letters from Soviet readers. Many of them relate stories of their own experiences under Stalin; some even send transcripts and testimony from the purge trials. Others. though, have criticized the author for telling unpleasant truths. A woman from the Ukrainian city of Vinnitsa, for example, charged Rybakov with being "vengeful" and "hateful." She wrote, "I have no doubt that our enemies would be happy to publish this book."

Some critics have wondered why Rybakov did not choose to write about a more recent Soviet leader, such as Nikita Khrushchev. The author's answer, in essence, is that Stalin was responsible for a sense of fear that is still an inhibiting force in Soviet life. "Everyone quaked in fear of Stalin," he says. "He did the thinking for everyone. Until we get rid of that fear, we will not be able to develop as a society."